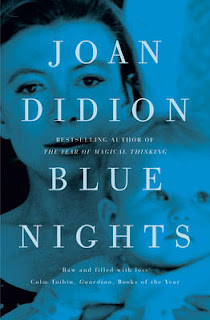 Blue Nights suffered at the hands of critics when it was first published. I found myself appalled at Germaine Greer and John Carey dismissing this distinguished writer’s grief on Newsnight. But they did their job and scared me off reading the book. What if they were right and Blue Nights was all vacuous navel-gazing instead of the microscopic examination of one’s own pain at losing first their husband and then their daughter in the most unlucky of manners? So I left it a while but I’m glad I went back to it.

Didion’s account of her husband’s sudden death, The Year of Magical Thinking, became so popular that her life probably doesn’t need reiterating here. And Blue Nights is not a straightforward retelling of Quintana’s life either, or rather Didion’s life while Quintana was in it; it is broken because this is how memory plays out. Didion is clutching at her memories of her daughter: the wedding, the adoption, the illness, the sparks of darkness only lit in hindsight.

I began reading Blue Nights knowing that I wanted to review it here and conscious that I did not want to write an apology for a once great writer. Didion’s non-fiction is known for its assuredness, even in The Year of Magical Thinking whilst rendered numb by her bereavement she is still trying to be the good journalist, digging into the situation, mining for its core truth. In Blue Nights that assuredness has been broken down; nearly every sentence questions. One of the criticisms I’d heard against this book was that it was hollow, with Didion putting herself at the centre where her daughter should be. Isn’t it absurd for one person to criticise another for not grieving right? And Didion is not really writing a biography of Quintana Roo, she is writing a memoir of her own trauma, it just so happens that that trauma is Quintana’s death and it swallows everything else, leaving Didion’s life hollow, an empty, sinister playground for her memories to knock about in. The writer is unravelling and the echoing sentences are the fraying evidence. The echoes are baroque, always circling back to the same, now mythologised, starting point: the phone call telling Didion that there is a ‘beautiful baby girl’ needing adopting at St John’s Hospital, Santa Monica.

Didion has also been criticised for name dropping, for labelling the clothes they wore and the places they went. But there are two good reasons for this: Didion could simply be trying to help draw the picture, misstepping, for sure, by believing we know how to visualise Christian Louboutin shoes, but are those shoes any different to the pink ribbon a nurse ties into baby Quintana’s hair or the ‘cap like a Dodger cap’ that the nightmarish Broken Man wears in Quintana’s imagination? She could also be noting how these things, fashion labels and swanky hotels, mattered during Quintana’s life and now mean nothing, ghosts of their former glories. It definitely seems like lazy thinking to pick on Didion for this materialism when she points it out herself in the book.

‘Despite recognizing that for a woman my age even to note such details of appearance will be construed by many as a manifestation of misplaced vanity.’

For a journalist who put herself inside the situations she wrote about, the memories related in Blue Nights show a very different woman, a woman on the quiet side-lines of her own life, a life that was filled with other people. She is more comfortable writing about aging and medicine than about Quintana and it produces sentences that prove her standing as a literary giant.

‘My memory would slip but whose memory does not slip. My eyesight would be more problematic than it might have been before I began seeing the world through sudden clouds of what looked like black lace and was actually blood, the residue of a series of retinal tears and detachments, but there would still be no question that I could see, read, write, navigate intersections without fear.’

Even the subjects of aging and medicine give short respite before circling back to Quintana. When Didion tells of a time she fell over, when she ended up being hospitalised, we see how empty her life is. This is a time when all you really have is your family. We see that without her husband and daughter, she is truly alone. The scene also echoes Quintana’s childhood fear of being left alone. With her tiny size and her vulnerability in age, Didion has become the lonely child. Sometime after her loss she begins to learn again, how to read and talk. Like a child. She lives out Quintana’s existence. It is another way for her to try and cling onto her daughter. Didion again is beautifully precise; a family is not separate members but one whole; we live each other’s lives.

Despite her loss of focus Didion doesn’t stop trying to reclaim the exactitude of her pen. ‘Let me again talk to you directly,’ she refrains again and again. Even the ‘you’ in that sentence is not stable, fluctuating between the reader and Quintana. For Didion, this whole book turns out to be her grasping onto what remains of her daughter. Didion ‘sees’ Quintana every day and is worried she will vanish entirely. Towards the end of Blue Nights Didion is watching the theatrical performance of The Year of Magical Thinking in the shadow of Quintana’s memorial service, adding another layer of unreality and echo but, hopefully, reaching some kind of conclusion for her.
Posted by Bookgannet at 05:44