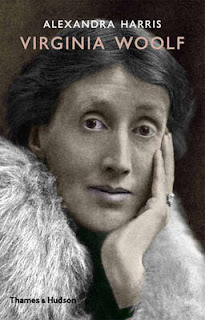 As a bookseller and writer there are some unforgiving holes in my reading history: I’ve started but never finished any Nabokov; I don’t think I’ve even picked up an Evelyn Waugh with the intention of buying it, let alone reading it. So I decided to rectify this by choosing one ‘important’ writer whose work I would read chronologically from beginning to end. I had read Mrs Dalloway when I was much younger, when the words swept over my head, and A Room of One’s Own made me first appreciate the essay form but despite only having a skimp handle on her work I have always known that Virginia Woolf might be the most important writer to me. I wanted to test the water with Alexandra Harris’s biography and it bolstered my confidence in choosing Woolf.

I have to take some time to write about the physicality of this book. If you take a slight glance at the cover, you can be forgiven for thinking the photo is black and white but there is a blush of dusky pink that brings to my mind quilted silk throws. This pink also bleeds onto the flyleaf. Thames and Hudson have resurrected the bookmark ribbon, here in complimentary and tasteful silver. The paper is thicker and creamier than you will find in most books. Its weight mirrors Harris’s words and the subject matter. Whole pages are sporadically given over to single photographs with short captions. I much preferred this to the lazy clumping together in the middle that is the normal layout. The amount of photos of original jacket covers for Woolf’s books is an indicator that for Harris the main point of Woolf’s life is the writing.

At 170 pages it is slight but Harris manages to pack her words tightly without need for padding. For someone whose writing can be seen as being too trapped in the mind, Harris draws out the emotion and feeling in and behind Woolf’s writing. Harris does air the personal, private indiscretions but she gives them a quick shake before folding them away. Harris prefers to concentrate on the writing; she holds up all of Woolf’s life and pegs it to each major work. It is at these points that Harris really shows her skill by immediately pressing on the main line of each novel.

So what of the person? Harris swiftly paints a picture of contradictions, of a personality who craved and shunned the limelight, of a wife who needed to be married but was almost forgetful of that marriage, of a wit and a worrier, of a woman plagued by nervous breakdowns who relished life in the rests between bouts, but mostly Harris shows that Woolf is the most important writer of the 20th Century.
Posted by Bookgannet at 02:03