What I Saw and How I Lied-Judy Blundell 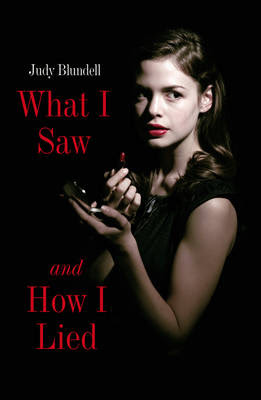 What I Saw and How I Lied

I distinctly remember how alien the adult world seemed to me when I was a child. Even when something particularly adult was said or done in front of me I didn’t fully understand. It all seemed dark and mysterious being an adult, seedy and forbidding yet attractive. Maybe, as children, we know we have to break our way into that adult world at some point, so we keep trying to understand it. We play at being adults.  Looking at this child/adult divide from the other side now can be deceiving; as adults and worried parents we are programmed to think that children are growing up too fast and are too fast in other ways. Reading What I Saw and How I Lied revealed to me that childhood today is the same as in my day, is the same as in the 1940s/50s. For children, there will always be an urge to grow up but also a sense that no matter how hard you try, you are still not a fully paid up member. Evie Spooner thinks that the key to that adult world is in being more like her mother, wearing her glamorous dresses, making up her face and taking care of her hair. The obstacle that she has to get over is that her mother is movie-star beautiful and Evie feels she is too plain.
The war is not long over. The tight reins of conservatism that have been the driving force of America are beginning to slacken. Joe, Evie’s stepfather, has returned from fighting in the war and has reinvented himself as a businessman, setting up several electrical stores. It is never asked of Joe how he managed to accrue the capital to start his business but, then, it is a time of freedom where anything seems possible and plausible. One day and with no warning, Joe sweeps Evie and her mother out of the Brooklyn home they have been sharing with Joe’s mother, Grandma Glad, to the exotic humidity of Palm Beach, Florida. In all the excitement Evie seems to forget the closeted telephone calls that Joe has tried to avoid since his return and doesn’t pay too close attention as to why they are almost alone in holidaying out of season. The only other family staying in their hotel are the Graysons, a ‘swanky couple’, themselves hotel owners from New York. One night, getting some fresh air outside of the hotel, Evie spies Mrs Grayson crying and warning her husband that this time they are taking something ‘too far’. Evie doesn’t hear what that something is but it turns out that the Graysons are not the only people with secrets.
Peter, a young man, also from New York, arrives and attaches himself to their group. He claims to know Joe from the war but while Peter is charming to them all, Joe’s reaction towards the newcomer is one of contempt. When a hurricane hits Palm Beach it doesn’t just muddy the water but also every belief Evie has, of herself and of the people she loves. She comes to realise that as well as bright lights and glamour, the world she craves to be a part of also harbours deceit and anger in its shadows and also, possibly, murder.
One of my many bugbears is overly long books. A tendency towards the overwritten reigns in contemporary literary fiction, in the sense of needing heavier editing and a constant use of florid description. What I Saw and How I Lied does neither. It is tightly written and the perfect size. There are no sagging or unsightly bulges. There are shades of To Kill a Mockingbird in some of the themes explored but without its breadth and sweep. What I Saw and How I Lied works as teen fiction because it doesn’t have that knowingness that adult fiction has. Things are revealed to the reader only as and when they are to Evie and it does not patronise the reader with a clear outcome. Like the time they are living in, there is no black and white, only shades of grey. The novel does not feel unfinished because of it; it feels more real. The writing also doesn’t patronise its readers; Blundell confidently uses slang of the time and doesn’t worry that it won’t be understood by a young audience.
The texture and time of the novel is appealing. The book and its main character both sit immediately between the births of youth culture, as explained in Jon Savage’s Teenage: The Creation of Youth, and the Sexual Revolution. This is a time of Jets and Sharks but also Tonys and Marias, of T-Birds and Pink Ladies but also Dannys and Sandys. It’s a time of trying to stick to being good like you have been taught but torn away from that by wanting to be reckless. It is a time in close proximity to such horrors that nothing seems settled or makes complete sense. It is a time of James Dean shouting at his parents that they are tearing him apart. Evie Spooner too is caught in this limbo; her mother and step-father doing their duty by constantly reminding her she is a child but Peter’s compliments and her own curiosity are pushing her into womanhood.  The novel’s real triumph is in revealing that at the core of the adult world is not the withholding of secrets, as Evie first believed, but is in fact secrecy’s more difficult cousin: self-denial.
Posted by Bookgannet at 09:34